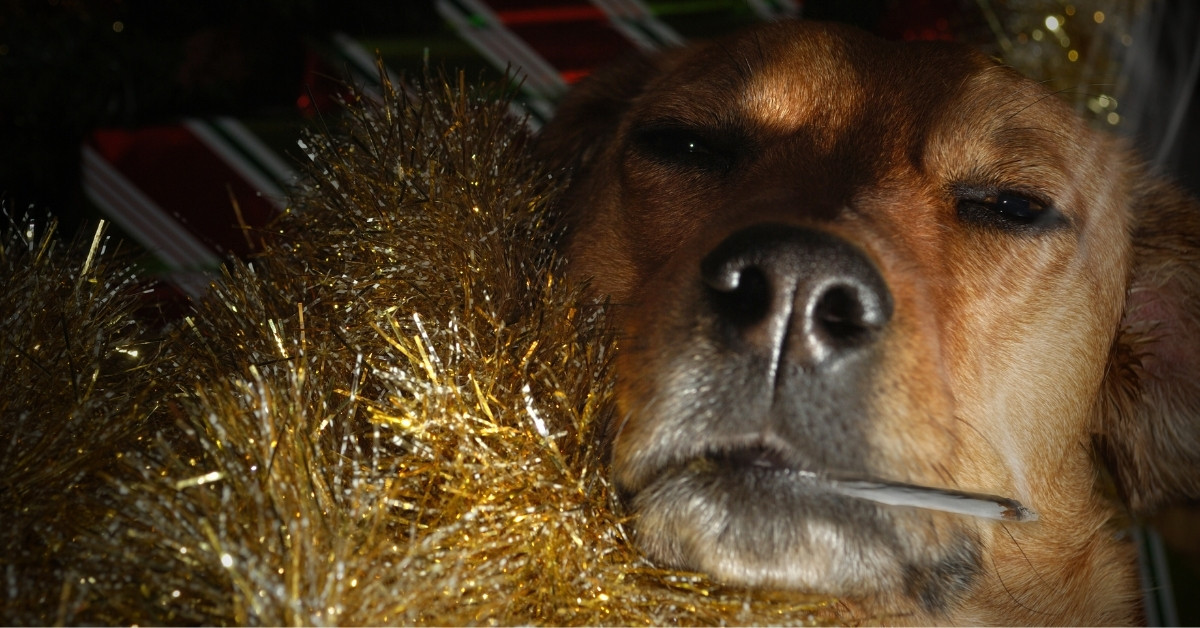 If you’ve been wondering, for whatever reason, can dogs get high from blowing smoke in their ear? Well, I have the answers for you.

No, dogs can’t get high from you blowing smoke specifically into their ear. Regardless, you shouldn’t do this because it can have implications on their long-term hearing. They also really won’t appreciate it, and it can even scare them.

So, although blowing smoke into the ears won’t cause your dog to get high, being that close to them with the smoke will mean that they are breathing it in.

Dogs can get high from breathing in smoke just like us, but it has a different effect on them than on us humans. Read more to find out.

Can Dogs Get High?

Yes, dogs can get high from cannabis smoke, just like we can. However, they aren’t quite as resilient as people to the effects of cannabis. They have more cannabinoid receptors than we do that pick up more of the toxins.

Although getting high occasionally might not do us that much harm, it can cause massive health problems for your dog over time.

Also, they don’t enjoy getting high as humans do either and the effects on their senses – being much more attune than ours – can cause them to get anxious or stressed.

Can Dogs Get High From Second-Hand Smoke?

Dogs can get high from second-hand smoke too. Even incredibly small amounts of THC (Tetrahydrocannabinol) can damage their sense of smell and they may panic as they won’t know what’s happening to them.

Unlike humans, who expect a relaxation effect to occur when smoking cannabis, dogs may feel scared and out of control, and it’s actually been known to have the opposite effect.

Some dogs, when they feel insecure, might even become aggressive.

So yes, dogs can even be affected by third-hand smoke. If you regularly smoke cannabis in your home with your dog, you may be damaging their health without realizing it.

What Are The Symptoms Of Pot Smoke Affecting Dogs?

If your dog is getting high, the immediate symptoms that you’ll notice are overactivity to noises and movements. You might also see your dog looking paranoid at the lamp in the corner when it’s turned on even though it has always been there.

This is the phase that could be dangerous, as your dog may overreact and even lash out at anyone approaching them.

Then you may notice your dog becoming drowsy and lethargic. There will probably be excess drool too.

One of the more serious effects, which might mean that you need to take a trip to the vet is urine incontinence. Although your dog is normally house trained, you may notice that they’re peeing on the floor suddenly. Excessive inhalation could also cause vomiting.

You might also notice dilated pupils and a slowed heartbeat. If these things become obvious to you and your dog is struggling to move around or staggering, take them straight to the vet.

Remember, be very honest and open about what’s causing the problems. Your vet won’t be able to help if they’re unaware.

It’s unlikely that second-hand smoke will kill your dog if they don’t breathe it in too often. However, it can cause lasting effects on their sense of smell, brain activity and can slow their heart if they breathe it in daily.

In severe cases of daily inhalation, your dog might start to get tremors, have seizures, or may even fall into a coma due to the heightened effect on their brain tissue.

These kinds of severe effects are more likely to occur in smaller dogs, as the amount of smoke will affect their lungs more quickly.

There’s also a higher correlation of smaller dogs with liver and kidney problems if they live in a household with regular pot smokers.

According to VCA hospitals, this is because the THC in cannabis needs to be stored in fatty tissue before it exits the body.

Because the kidneys and liver of smaller dogs find it more time-consuming to process, it can cause long-lasting damage – much like alcoholism in people.

Much like people, excessive cannabis smoking can also cause extreme paranoia. You may start to see personality changes in your dog over time.

If you start to see a personality change in your dog or notice any other health issues, you should take them to a vet for assessment.

Can Dogs Get High From Vape Smoke?

Vaping can lessen the harmful effects of cannabis smoking on your dog. It’s a great idea to get a vaporizer if you know you’ll be smoking cannabis a lot.

However, some of the ingredients of cannabis are still active, even in vape smoking – otherwise, we wouldn’t do it. So, although it is better for your dog, it can still make them high, it will just take a little longer.

How Can I Keep My Dog Safe From Cannabis?

Because cannabis use can affect dogs and also stress them out, it’s a good idea to always keep them out of the room when you’re smoking.

If possible, always smoke in an area with good ventilation where the smoke won’t be able to seep into fabrics.

If you have to smoke in an area with fabrics such as couches or cushions, it’s a great idea to steam clean them regularly to ensure there’s no residual smoke.

Switching to vaping – if that works for you – could be a better option for your dog. Although it’s not a perfect preventative, it does lessen the intake for them and means that it will take much more smoke to affect them.

You should also ensure that your dog can’t get ahold of any cannabis in your home before you’ve smoked it.

Eating cannabis or digesting it with edibles, such as brownies, could not only give them the negative effects of the cannabis itself but could cause more damage because of other ingredients that they’ve ingested.

For example, chocolate is toxic to dogs and can actually be fatal. If you baked your cannabis into brownies, make sure they’re out of reach.

What Should I Do If My Dog Starts Vomiting After Inhaling Smoke?

If your dog starts vomiting after inhaling cannabis smoke it’s a sign that the smoke really doesn’t agree with them and could have more lasting effects if it continues.

Typically, a single session of inhalation shouldn’t cause too much lasting damage.

However, the vomiting itself could be a problem, especially in smaller dogs. If your dog doesn’t appear to recover straight away and becomes lethargic, you should go straight to the vets.