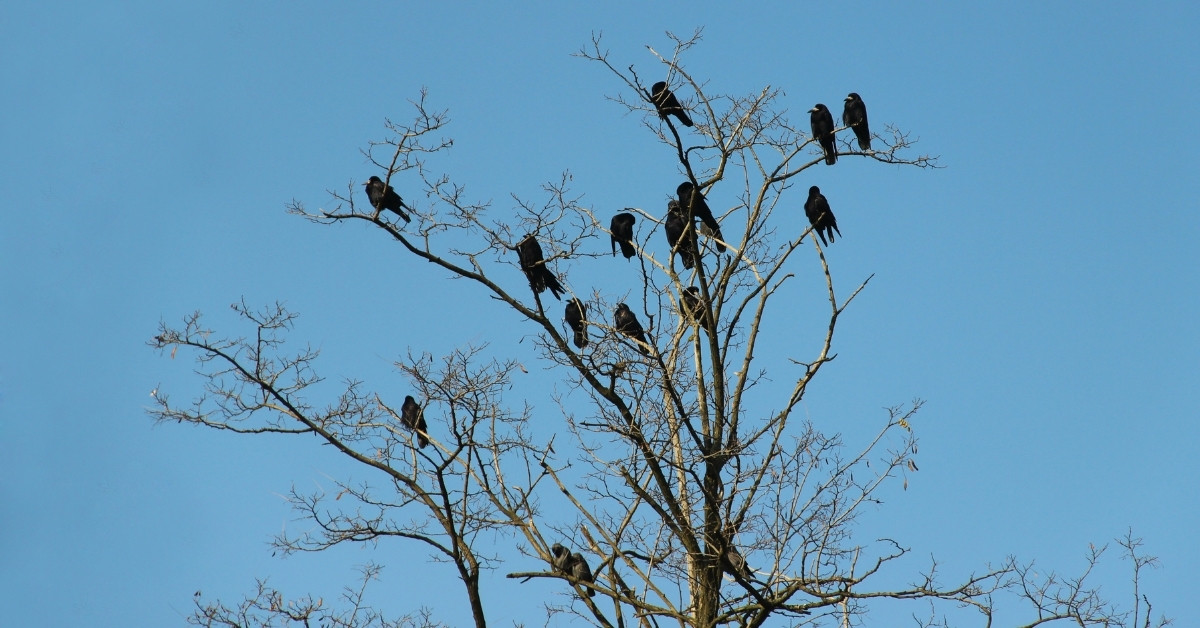 It’s quite common, especially if you live in an area with lots of wide-open space, to find a large flock of crows gather around your house each morning.

While some might brush this off as a natural phenomenon, others feel it might have a more sinister meaning.

So, what does it actually mean when crows gather outside your home? Well, it could be for a few different reasons including protection from predators, a rest stop while migrating, or to mate and roost.

Why Do Crows Gather And Caw?

They’re incredibly social birds and a flock can consist of anything from 300 to 1000 individual birds.

Crows gather together forming larger groups when it’s time to roost. This is because there are more options for mating in a larger group and it also gives a little more protection to each individual bird. Mating is a vulnerable time.

Research shows that smaller groups of crows typically meet together to roost at night in larger numbers, only to break off again in the morning.

This could be to generally socialize, or possibly to exchange information regarding the wider area.

So, why do crows caw? Well, simply, it’s the way they communicate. When a larger group of birds comes together, they caw to introduce themselves to one another and to express emotion and information.

You may find that crows caw louder at certain times of the day. They caw loudly first thing in the morning and just before dusk.

People are always put off by crows. In some cultures, having crows land near your home is a symbol of bad luck. However, it’s important to remember that the crows themselves don’t bring bad luck.

In fact, the myth is that it’s the number of crows on your roof that matters most. Some crows could even bring good luck.

So before you tar all crows with the same brush, make sure you count them to work out what you’re luck is going to be.

Why Do Crows Mean Bad Luck?

A group of crows is called a ‘Murder‘. Although the origins of this name aren’t exact, it’s likely that the sinister name came from medieval times.

A crow’s pointy, sharp features, and sleek black feathers would originally have been seen as a sign of a witch’s familiar. We often see them portrayed as helpers to witches in popular culture today.

Their connection to death also goes a little further than that. Crows are known for their intelligence. After the death of one of their flock, the crows will often gather around the body. Some of the crows may even peck at it.

Scientists think that this could be part of a grieving process. Or perhaps it could be the birds trying to discover the cause of death in an attempt to avoid it themselves.

You can see how the morbid pecking of the body of your friend can come across as sinister though.

Their connection to witchcraft and death often makes them targets for rumors of bad luck. However, you should be completely safe as long as you aren’t superstitious.

What Attracts Crows To Your Yard?

Crows are omnivores and will literally eat almost anything. Usually, if a flock gathers in your yard, it’s because you have something tasty to offer.

Crows are known for being opportunists. They thrive on agricultural land where there may be easy vegetables to feed on.

If you happen to live next to an area of open farmland, you’ll probably see a lot of crows. This is because the food near you is easy pickings.

Crops from farmland also attract a wealth of juicy insects. On damp mornings, insects are more likely to be a bit sluggish and may wander on the surface of your lawn.

A flock of crows will make short work of a load of bugs. They may even be doing you a favor.

Or, if you happen to live just outside a city, it’s possible that the scavenger opportunities are amazing there too. Trash cans full of half-eaten food are a buffet to a flock of hungry crows.

Alternatively, crows could land in your yard because it’s enclosed. Having a large fence around your yard, provides a great shield from bad weather and it can keep predators out too.

If you notice a lot of crows landing on the floor within the boundaries of your yard, it could be that they’re looking for shelter.

Crows need clean water too. If your home is next to a freshwater source where the crows are able to bathe and drink then your yard might seem like the perfect stop-off point.

Crows ‘mourn’ the death of a flockmate. If there’s a dead bird in your yard, then others of the same flock may circle and land to mourn or to find out what happened.

You’ll often find crows pecking at their dead comrades, but it’s more to gain information than to cause harm. However, it can look a little unnerving.

Why Are Crows On My Roof?

If you have a resident flock of crows, it’s likely that a lot of them will land on your roof. This could be because: