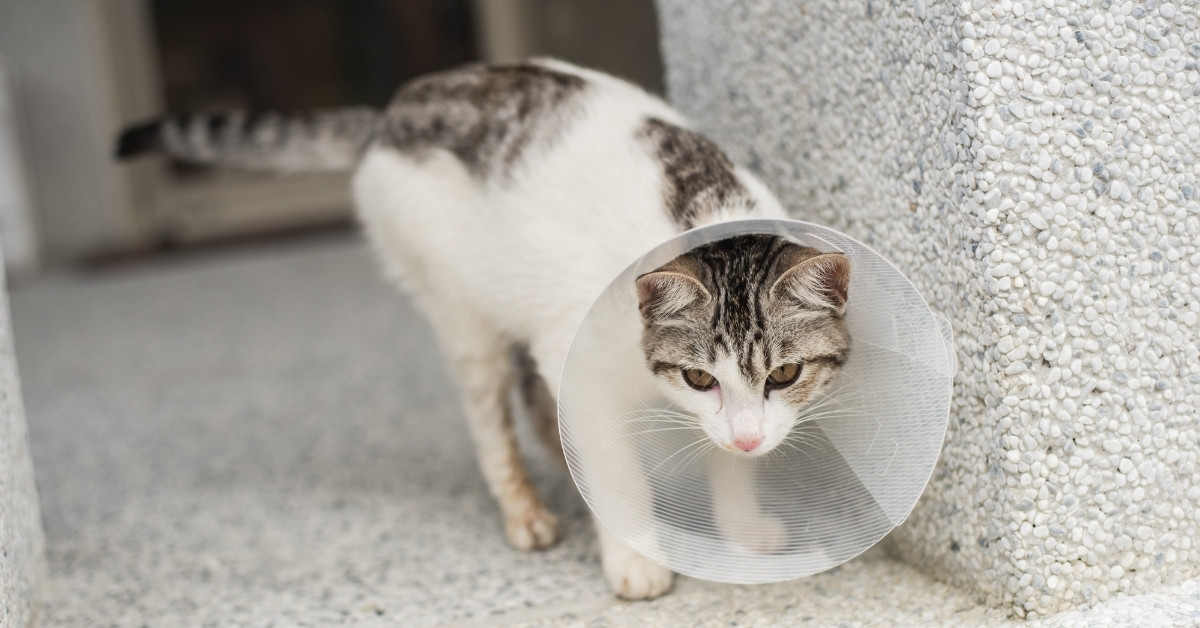 Because surgery is becoming increasingly more sophisticated, castration (complete removal of the testicles and sack) is now a thing of the past.

When you take your male cat in to be neutered you’ll usually find that only the testicles themselves are removed. The surgeon will leave the testicular sack and scrotal skin around them intact.

This helps the cat to feel a little more at ease with the procedure and won’t affect the appearance of your cat too much.

Once the wounds have healed, your cat will appear to have testicles. However, it’s actually just the layers of skin and tissue where they once were. This is completely normal.

How To Tell When a Cat Is Neutered

There are a couple of ways to tell if your cat has been neutered or not, even if you can see what appear to be testicles remaining.

The easiest way – but perhaps the least dignified for your cat – is to feel their genitals.

First, you’ll need to ensure your cat stands still and is reasonably comfortable. Approach them from behind and lift their tail straight up. You’ll then be able to find the testicular sack beneath the anus, but above the penis from your angle.

Feel around in the sack (don’t squeeze too hard, they won’t thank you for it).

When the sack is barely visible, this is a sign that your cat was neutered a long time ago and the scarred tissue has now reduced as your cat has aged.

If you don’t see any sack there, but you’re still not convinced, you should measure the distance between the anus and the penis. If your cat is neutered, there will always be at least an inch between.

Should I Neuter My Cat?

It’s always a good idea to neuter your cat if you plan on letting them out of the house. Otherwise, you could have a litter of kittens that become your responsibility.

Because there are so many stray cats, it’s also the responsible thing to do to avoid filling up shelters with unwanted kittens.

Neutering your cat has other advantages too. If your cat has a fairly hyperactive personality, this may be because of the testosterone that’s coursing through them.

Neutering your cat and remove some of the excessive testosterone and make them more relaxed and less aggressive.

It also means they’re less likely to get into fights with other cats. It could even limit their prey instinct, so they won’t fetch endless dead mice and birds home as gifts.

Can a Male Cat Look Like He Isn’t Neutered When He Is?

Yes. Cat owners often question whether the job has been done right when they come back from the vets with a cat that still appears to have testicles.

However, because of the delicate operational technique, it’s not actually the testicles that you can see.

Once your cat is fully healed, you’ll probably see what seems to be a pair of fully formed testicles right where they should be.

Actually, this is because cats have a multi-layered sheath of skin that protects their testicles from harm. These layers will pull together and harden to form what might appear to be a pair of testicles again.

This is normal and the size and shape may vary over time as your cat ages.

What Does a Male Cat Look Like When He’s Neutered?

This entirely depends on how long ago your cat was neutered. If the neutering was fairly recent, you’re likely to see some swelling around the genitals. Your cat may also walk a little funny for a few weeks.

However, once the multi-layered sheath heals over, it’s likely to look exactly likely the pair of testicles they originally had in place. Visually, they may look almost the same as before the surgery.

Or it’s possible that the sack may look slightly saggier depending on the surgeon and where the incisions have been made.

As your cat ages though, the tissue around that area is no longer needed to protect the testicles, so it will start to recede and reduce, just like scar tissue does.

A few years after the operation, you may not notice it there at all.

When Do Cats’ Balls Drop?

To neuter your cat, you’ll first need to wait until their testicles drop, so it cannot be done as a tiny kitten.

The testes are typically formed as part of the abdomen and drop at around 2 months of age. When they drop, they travel through the inguinal rings and into the scrotum.

Before the age of two months, the scrotal sack will be completely invisible to the eye. You’ll not normally see a penis on display either.

Remember to double-check the sex of your kitten. The lack of testicles doesn’t necessarily make your cat female.

However, if your cat suffers from cryptorchidism (a condition that stops either one or both of the testes from dropping) then their testicles may take much longer to drop.

They may not even drop at all. If your cat has reached 2 months of age and there’s still no sign, then you should visit your vet for a consultation.

In extreme cases, an ultrasound will be required to determine why the testes cannot reach the scrotal sack. They may need to be removed through more invasive surgery.

Why Are My Cat’s Balls Black After Neutering?

Normally, after neutering your cat’s balls – or at least, where they used to be – may appear to be black. This is normal and can be the result of bruising or a little bleeding from under the skin where the blood vessels have been tied.

You are likely to see this more in white or lightly colored cats just because the contrast is more striking. However, this does normally occur in all cats, at least for the first few days after the procedure.

You should notice the darker color starts to clear up after the first week. Eventually, the skin should return to normal.

If your cat is slightly older, it may take a little longer to heal, but it looks more painful than it is, so you shouldn’t worry.