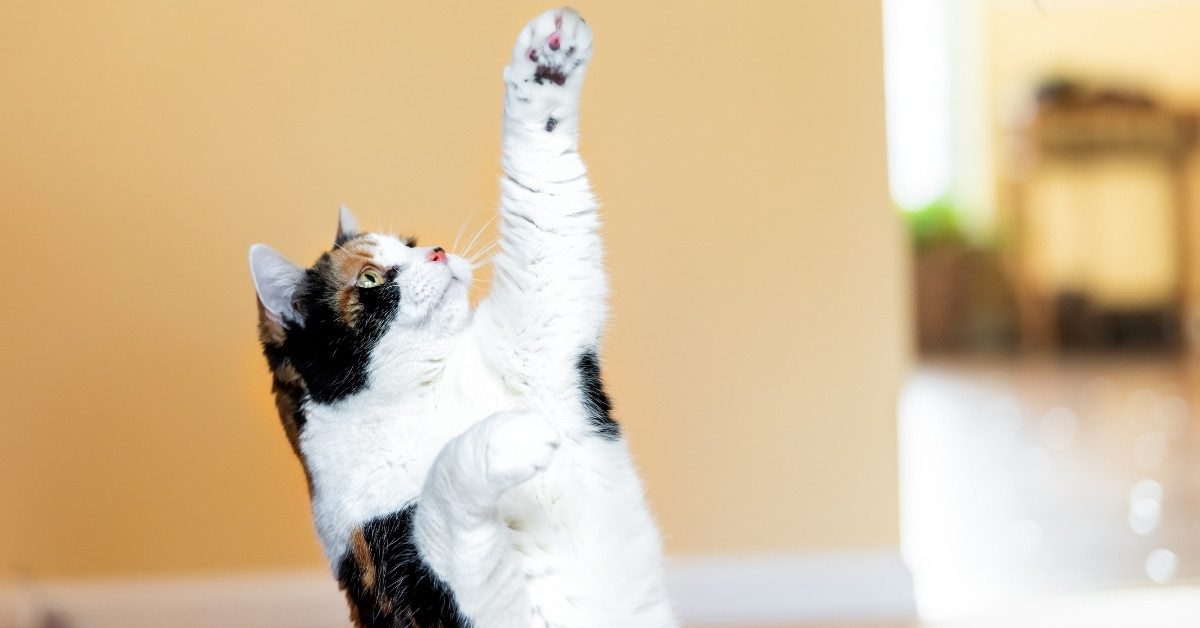 Cats can be feisty little furballs, slapping, scratching, and biting whatever comes their way. But, have you ever wondered why do cats slap or hit you?

Or, for that matter, why do they slap or hit other animals and just plain objects? Well, let’s find out.

Why Do Cats Slap Or Hit You?

There are a couple of reasons that your cat may slap or hit you. The first and most common reason is to play.

In the wild, cats are quite rough play fighters and it’s normal for them to play with their siblings by batting their faces and biting.

It helps them to develop natural predator behavior and encourages them as they get older to take down their prey.

Your cat may just want to play with you. They don’t realize that sometimes their play techniques can be a little too rough for us and slapping, hitting, and biting could actually hurt.

The other reason that your cat might slap you is that they’re feeling like they’re getting a little too much attention.

Cats are usually quite solitary animals and although they like to cuddle occasionally, they don’t like to feel crowded.

If you’re constantly petting your cat and they are getting a little tired of it, they may slap your hand to tell you to leave them alone.

Why Do Cats Slap Other Animals?

Pawing at other animals is part of your cat’s natural predatory behavior. When they find mice or birds, their instinct is to catch them and play with them a little before eating.

It helps them to keep their reactions sharp and activities their chase instinct.

For this reason, you may see them out in the yard chasing mice, then just pawing at them when they catch them.

Some domesticated cats still have the chase instinct to catch the prey but have never needed to actually eat it. You’re obviously feeding them too well at home.

This means that they may catch a mouse, play with it between their paws for a while, then let it go. That works out better for the mouse and for you, as there won’t be any ‘presents’ left on your doorstep.

You may also find that your cat slaps your dog at home. This is usually for the same reason that they might slap you.

Dogs are sociable animals and in the absence of another canine companion, they’re likely to focus all their attention on the cat.

Your cat, on the other hand, may want a little ‘me time’. Your cat will bat away your dog’s nose if they need a little more personal space.

Why Do Cats Slap Things And Knock Them Over?

Cats are naturally curious animals and just like people, they use all of their senses to try to determine what things are, what they do, or why they’re there.

Cats actually use their paws in the same way as we use our hands.

The pads on their feet – affectionately known as toe beans – actually carry nerve receptors that give the cat information on the weight and material of the object. This helps them to determine what it is.

Touching an object gives your cat an idea of what it is and why it’s there. Sometimes knocking over vases or fishtanks may be completely accidental – they were just being innocently curious.

However, sometimes it’s completely not accidental, such as here:

Your cat will be very territorial of their home and if something has been placed in one of their favorite spots, they won’t think twice about swatting it away.

Knocking things over could even be a cry for attention from your cat.

If they’re feeling a little pushed aside, a sure way to get your attention again is to make a huge mess. Try not to be too angry with them.

What Does It Mean When Cats Swat At You?

Your cat may swat its paws at you because it’s wanting more attention. If you’re lazing around in front of the TV, it’s likely that your cat will be lounging on the sofa next to you.

You’ll pet them for a while then perhaps start scrolling through your phone. Sometimes, your cat isn’t done with the petting, even if you are.

They’ll swat at your hands to make you aware that you stopping the scratches isn’t acceptable to them and you’ll need to continue.

Alternatively, it’s possible that you’re over-petting and they’d like you to stop so they can go to sleep.

It’s difficult to judge why a cat swats at you sometimes, but the better you get to know your cat, the easier it will be to determine exactly what their swatting means.

Why Does My Cat Hit My Other Cat?

Cats swatting or slapping other cats with their paws is normal behavior. Typically this is just play fighting and it’s something that’s carried down from their wild ancestors. It allows them to keep their reactions sharp.

This will only last a few minutes and will normally be followed by some light-hearted chasing.

However, if you notice hissing, clawing, or other aggressive behaviors, it could be that your cat is trying to assert dominance over the other cat.

While there is always a dominant cat in a household, if this behavior starts to happen too often, you may need to consult a cat behaviorist to see if there’s anything you can do.

It could be quite stressful for both cats if they are always fighting for dominance.

How Do You Discipline A Cat For Attacking?

If your cat is using their paws to hit you in an aggressive way to get more attention, you need to make sure that the behavior is controlled before it gets worse.

If a kitten play fights with you, they sometimes don’t understand when they’ve gone too far. When this isn’t quickly corrected, your cat may do this into adulthood.

Many people will tell you to tap a cat on the nose when they display bad behavior. However, this could actually spur retaliation.

They may think that you’re trying to play back and the aggression might actually increase.

Instead, when your cat gets too rough, VCAhospitals recommends that you should simply stand up and walk away.

Removing yourself from the situation will deprive your cat of the attention that they’re craving and eventually, they’ll learn that the behavior has negative effects.

Why Does My Cat Hit Me With His Paw When I Pet Him?

If your cat hits you with a paw repeatedly during petting, this is usually because you’re overstimulating them or giving them too much attention.

While cats do like cuddles, if they are trying to get to sleep, only so much petting will do. Once they’ve had enough they will hit you to let you know it’s time to leave them alone.

Your cat hitting you during petting could also be them letting you know that you’re petting in the wrong place.

Cats like to be petted on their heads, backs, and sometimes on the belly (but only when you’ve earned their trust).

If you start to pet them around their legs or tail, the hitting will be to warn you that those aren’t places that they’re comfortable with you touching, so you should move your hands somewhere else.

What Does It Mean When A Cat Hits You With Their Paw?

It could be that your cat is feeling insecure. Despite their independent personalities most of the time, cats actually do crave your love occasionally. Hitting you with a paw could be a call for attention.

Animalpath.org suggests that this may occur more often in times of change. Perhaps if you have moved house, if there’s a new pet around or a new baby. The paw swatting is just a cry for attention.

Evidence also suggests that your cat may do this more when they’re in heat. At this time they are more prone to overstimulation and may become aggressive much more quickly than they normally would.

Hitting you with their paws is a sign that you need to leave them alone.

If your cat does this all year round it may be because they haven’t grown out of this behavior from being a kitten, when it may have been more acceptable.

If this is a hangover from kitten behavior, then they may just be asking for a little more attention. Continuing to provide attention because your cat hits you may lead to your cat thinking this is acceptable though.

If you feel your cat is hitting you with their paws to get your attention, then you should try not to encourage them by giving it, no matter how cute they are.

Why Do Cats Hit You With Their Tail?

If your cat is wrapping itself around your legs and hitting you with its tail while rubbing against you, this is often a sign of affection. It’s just like when you pet them.

They are wanting to return the favor and show that they love you. When this happens they use the whole of their tail and gently wrap it around your legs.

However, tail flicking can also occur when your cat is feeling frustrated. If your cat is lying or sitting down and you see the very end of their tail flicking backward and forward, this is often to show that they are upset.

Some pet owners often mistake this for a good sign, because dogs wag their tails when they’re happy. But cats are the other way around.

If you notice intense flicking of the very end of their tail, stay out of their way. Trespassing in their territory at that moment may earn you a scratch.

Why Do Cats Hit You With Their Head?

Cats hit you with their heads to make you part of their family. Some of the scent glads that cats use to mark their territory are in the corners of their mouths.

You’ll often see them marking their territory on the sides of the sofa or coffee table.

When they headbutt you, they will move their heads to the side and rub the corner of their mouth on you. This shows that they trust you and that you are seen as part of their family.

You should take this as a massive compliment. Give them some affection back to show you love them.