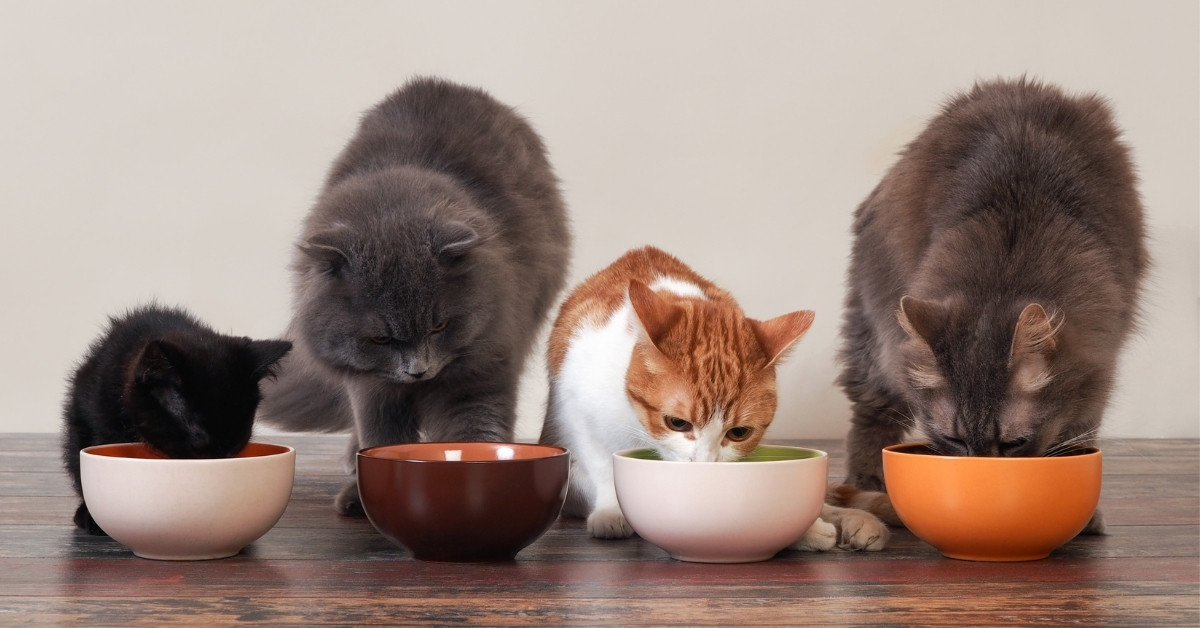 If you watch your cat when they’re eating, you might notice that they regularly shake their heads back and forth. It’s sort of like an involuntary twitch.

This is completely normal and a sign that your cat still has some of its wild instincts.

A study by Leyhausen suggested that this behavior mimicked the prey-catching process in wild cats.

If a cat had to hunt for rodents or birds in the wild, they would generally catch them between their teeth, and the head shaking would be part of the killing process to ensure the teeth sink in properly and to kill the prey faster.

This shaking of the head during eating means that your cat is retaining some of its natural instincts when it comes to eating and imagines its bowl of food as the prey that they’d catch in the wild.

Why Does My Cat Tilt Its Head When Eating?

After a wild cat kills its prey, they would eat the prey with their heads tilted purely because the body of the rodent or bird would droop to one side or lay on the floor.

The head tilting would help them to gain better access to the meat and bite into it a little deeper.

You will notice that your cat’s head tilts further, the tougher the meat is. Their head tilt helps them to get a better grip on their meal in the wild if it’s a little more difficult to eat.

Despite your cat eating normal cat food, this behavior may continue and just shows some of those natural instincts shining through.

You may notice that they tilt their head further if they’re eating dried cat biscuits, rather than wet cat food, simply because the biscuits are more difficult to eat.

Why Do Cats Shake Their Heads When Playing?

Kittens in the wild will learn how to hunt and catch prey by playing with their siblings first. This is why their play can see quite rough.

They may use their teeth and claws when they’re playing with a toy or with your hands and feet.

This means that, when they’re playing, some of those natural behaviors are likely to come out and they may treat the toys as the prey that they’re trying to catch and kill.

Head shaking is the best way to ensure prey doesn’t escape when it’s caught between their teeth. It deepens the bite, disorientates the prey, and speeds up suffocation.

Your cat is shaking its head while playing because they are just mimicking that natural behavior.

Should I Be Worried If My Cat Shakes Its Head When Eating?

Normally, cats shake their heads because they’re enjoying eating. Shaking their head is a mimicry of their natural prey instinct.

They will shake their heads in the wild to kill the prey and will normally tilt their heads back and forth in order to make it easier for them to eat.

Most of the time, head shaking is nothing to worry about.

However, there are a couple of issues that you’ll want to keep an eye on if you see your cat shaking their head a lot while they’re eating.

Normally head shaking or tilting is normal. However, you shouldn’t see this all the time.

If you feel that it’s happening more than normal and it’s taking your cat a long time to eat their food, it may be a sign that they’re struggling to eat due to a dental issue.

Head tilting is a way for cats to make it easier to eat tougher meats.

If your cat is finding it tough to eat, it’s possible that they are experiencing pain or discomfort in their teeth and gums when they put pressure on them. It’s worth checking out their mouth for any obvious inflammation or bleeding.

Gingivitis, cavities, or swollen gums affect 68% of adult cats. If your cat is elderly, you may need to think about visiting the vet for treatment and providing softer food sources.

So, head shaking by itself isn’t a massive issue. However, if you notice that the head shake regularly turns into a full-body shake, it could be a sign of something more sinister.

Hypoglycemia is when your cat’s blood pressure drops to dangerous levels.

This can happen more often when they lower their head to the floor and put their back end in the air as the blood flow is altered.

This initially may cause your cat to shake and could eventually result in seizures or fainting.

If you notice your cat shaking a lot while they’re eating, you should take them to the vet for a blood pressure check. Hypoglycemia can be treated with medication.

A cat may shake its head repeatedly because of more external health concerns that are easily treatable. Itching is one of the main reasons that a cat will shake their head.

You may also see this accompanied by excessive scratching or rubbing up against furniture.

If your cat is shaking their head because they’re itchy, you should look out for rashes or inflamed skin.

It might be that your cat has a condition that makes their skin flaky, an allergic reaction, or even sunburn.

It may be that your cat has picked up mites from another animal outside the home. Mites tend to hang around a cat’s head, ears, and back of the neck as these are the areas where there’s most blood flow.

If your cat is shaking their head, it could be because the mites are itchy.

If your cat has an ear infection, they’re likely to shake their head because they can’t scratch inside their ears where it’s painful or itchy.

You’ll notice an ear infection if the outside of the ear is red or inflamed or if the ear is giving off an unusual smell.

For each of these issues, you should visit your vet as simple treatment can be provided to eradicate any further itching and head shaking.

What Happens If My Cat Shakes Its Head Too Much?

If your cat is shaking their head too much, either because they’re struggling to eat and shaking makes this easier, or because they have a health issue, it can have some longer-term consequences if not dealt with.

You should take a trip to the vet to see if everything is okay if your cat is shaking their head a lot. If the shaking gets noticeably worse, you run the risk of allowing them to cause themself further damage.

Aural hematoma or “pillow ear” is when the blood vessels in the ear burst as a result of excessive shaking of the head. If this happens, the area around the vessels fills with blood, creating an inflamed appearance that can become quite painful.

Once this has happened, the fluid can be drained by a vet. But over time, the issue will continue to redevelop.

Depending on the state of your cat’s health, your vet may recommend laser surgery to fix the issue more permanently.

However, this could possibly lead to your cat’s ears looking more deflated and a little strange.

This issue is purely cosmetic and won’t affect their hearing, but it’s worth avoiding by catching and diagnosing the head shaking early.