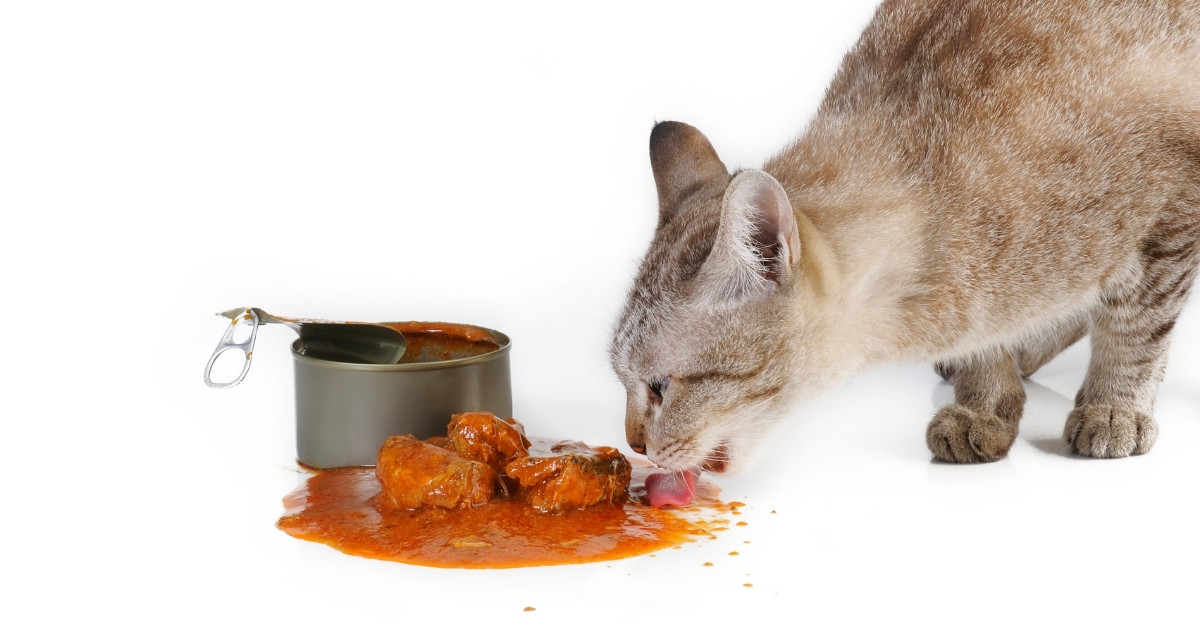 If you’ve been wondering, can cats eat sardines in tomato sauce?

Well, cats shouldn’t eat sardines in tomato sauce, though they can eat sardines on their own or in water or oil.

The reason for this is that the tomato sauce contained in sardine cans isn’t pure tomato. It is usually accompanied by a high salt and sugar content and artificial flavors.

The high salt content especially can cause issues with a cat’s digestion.

Too much salt can cause them to become easily dehydrated, cause vomiting, seizures, and even longer-term issues like sodium poisoning and kidney or bladder stones.

The tomato sauce in sardine cans is also likely to be flavored with spices, garlic, and onions for our benefit.

However, spices can actually make the fish taste bad to your cat and the onions and garlic are toxic to them. Eating sauce with lots of garlic could cause them to become critically ill.

What Should I Do If My Cat Has Eaten Sardines In Tomato Sauce?

If your cat has accidentally been fed sardines in tomato sauce or they’ve managed to sneak past you to steal some you shouldn’t be too worried.

Although the sodium content in the tomato sauce really isn’t good for your cat, a single meal with extra salt shouldn’t cause any long-term damage.

You should provide them with lots of fresh water to dilute the salt for digesting as much as possible.

Your cat may vomit up some of the sardines, which is normal in this situation.

However, if you notice continuous vomiting after 12 hours, or start to see signs of lethargy or loss of appetite, you should take them straight to the vet for a check-up.

Cats can eat tomatoes as long as they’re fresh and from the vine, though they may not be in a rush to eat them.

Although tomatoes actually taste quite sweet to us, cats have different taste buds to us and may find them a little more sour.

This means that, although you offer your cat a nice fish and tomato dish, they may turn their nose up at it. If they were to eat fresh tomatoes though, there would be no harm done.

However, your cat may actually like tomato sauce instead. This is a no-go in terms of a cat’s diet. Tomato sauces aren’t always made for pure tomato. To cater to human taste buds they also contain lots of sugar, salt, and flavorings.

The salt content can actually cause sodium poisoning, creating dehydration and longer-term intestinal issues. Whereas the sugar may contribute to your cat’s weight gain.

You should also avoid tomatoes that are still on the vine. The actual leaves and stem of the tomato plant contain solanine which is incredibly toxic to cats.

Can Cats Eat Sardines With Bones?

Most canned sardines will have the bones removed – or most of them at least. Any bones left will be tiny, flimsy bones that your cat should have no problem with.

However, you should never deliberately feed your cat fish with bones in. Most canned fish has already been cooked, meaning that any bones left in there are likely to be brittle and could splinter apart.

Any tiny bones that your cat eats could get stuck in their teeth and cause gum problems and pain.

If the bones are swallowed, they could even cause issues in the stomach or intestines if they get lodged, causing tears which may lead to wider health issues.

If you notice any bones in your cat’s food before they eat it, always do your best to remove them.

Can Cats Eat Sardines Every Day?

Cats shouldn’t eat sardines every day, or any other fish for that matter. Sure, fish is great in small quantities because of the omega-3.

However, it’s typically not something that cats need in their everyday diet – even though cats eating fish is a cliche.

In the wild, cats rarely eat fish. They survive more on other meaty prey such as rodents. This means that their diet doesn’t necessarily require fish.

Too much fish can actually cause weight gain. Oily fish is actually deceptively high in calories and your cat may become obese if it eats too much fish.

Mercury poisoning could also be an issue with too much fish. Because of the current climate, even clean water now has hints of metal in it.

These metal fragments are swallowed by the fish and passed along to your cat. This issue has been seen most often with tuna, but having sardines each day could pose a risk.

Sardines should be given to your cat no more than once every couple of weeks.

Can Cats Eat Sardines In Oil?

However, too much oil can cause issues with your cat’s stomach lining and may cause them to vomit.

The oil can also have a laxative effect causing diarrhea if they eat too much.

Buying tins of sardines in sunflower oil is fine, but you should drain off the oil as much as possible before you offer the fish to your cat.

This way, they still get the benefit of the oil, without it having any negative effect on their health.

Soybean oil is also okay for cats to eat, so sardines in soybean oil could work too. The soybean oil actually contains a lot of natural omega-3 which is one of the great benefits of eating fish anyway.

You should still drain the sardines of the oil before serving it to your cat.

Cats can eat canned pilchards. In fact, they’re much better for them than sardines or tuna, which are both strangely, more popular choices.

Unlike sardines, pilchards offer a wealth of health benefits for your cat as long as you avoid pilchards in tomato sauce.

Alongside the protein that most fish offer, pilchards provide your cat with taurine, which is an amino acid that your cat can’t make by itself naturally.

You can feed your cat tinned pilchards once every couple of weeks to make the fur appear more sleek and shiny and give them a tasty treat.

Pilchards in oil, as long as the oil is drained prior to serving, is fine. However, you should avoid giving your cat pilchards with tomato sauce or brine due to the high salt content.