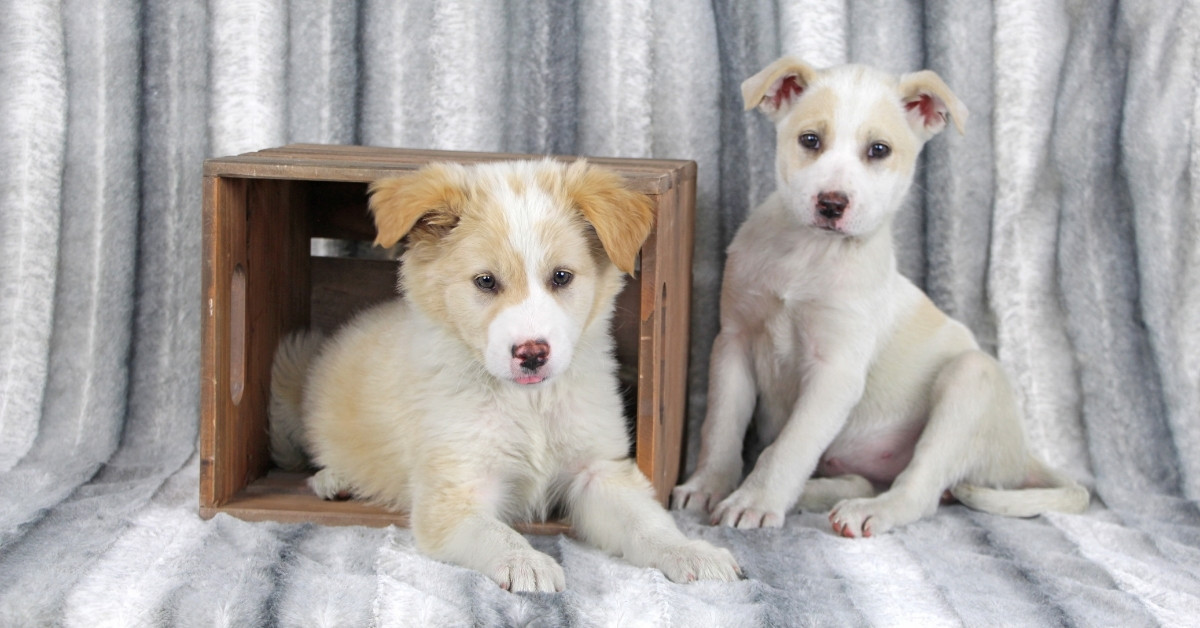 If you’ve been wondering, can brother and sister dogs have puppies?

Yes, brother and sister dogs can have puppies. In fact. It’s more common than you might think.

Although dogs are intelligent enough to recognize their family members, even later on in life after they’ve been separated, they don’t have the same concept of family relationships as people.

To them, another dog, regardless of family ties, is an acceptable mate.

You may even see brother and sister dogs attempting to mate from an early age if they are kept in the same household.

This is because their instinct is to carry on the species. If there are no better prospects, a sibling will have to do.

However, just because they can have puppies, it doesn’t mean that they should.

Breeding two dogs from the same family together is called inbreeding. It can cause a few health issues further down the line.

Is Inbreeding Bad For Dogs?

Yes and no. Some professional breeders do use inbreeding as a technique to produce puppies that have specific traits. For example, dogs with elongated noses, or a specific ear position.

The puppies who are bound to have these similar traits are siblings because they share DNA.

Inbreeding can produce a predictable look for puppies which could be a selling point for showgoers. It could also have some health benefits.

For example, if you are intending to breed a puppy to remove some of the health issues that they already have.

Brachycephalic dogs (dogs with snub noses) such as French Bulldogs or Pugs struggle to breathe due to their facial structure. So, if you inbreed two dogs with a slightly longer nose, the puppies may be able to breathe more easily.

Controlled inbreeding such as this has been used for generations to create the breeds of dogs that we have today.

However, if you aren’t a professional and you accidentally breed a brother and sister, this could be bad for the puppies. In the same way as good traits, bad traits could also be highlighted or accentuated by inbreeding.

If you have a brother and sister dog who have a genetic health issue, this could be passed along to the puppies and made much worse.

For breeders that don’t know what they’re doing, line breeding could also occur. This is when the parents’ parents of a puppy are also siblings.

In these situations, the puppy is much more likely to display severe health issues as the gene pool isn’t wide enough.

This may happen in puppy farm situations, where the same dogs breed with each other repeatedly to produce puppies for a profit.

Always make sure you have seen the papers for the dogs and can see both parents before making your purchase. If any health issues do present later, you will need to know where your dog came from.

How Do You Tell If A Dog Is Inbred?

Although many inbred dogs appear completely normal and aren’t affected too much by inbreeding, if you have a dog that’s been line-bred, so several generations have been bred with close family members, this may start to show.

They may show defects in their physical appearance or have mental or emotional issues. Sometimes, inbred puppies will appear much smaller than other puppies of the same breed and same age.

Hip dysplasia is also a common issue in inbred dogs, especially if their breed has a low set back end and high shoulders, for example, Alsatians.

Inbreeding is also the cause of the infamous deaf dalmatian problem and the respiratory issues that sometimes appear in boxers and bulldogs.

If you notice irregular bone structures, issues with eyesight, hearing, or breathing, or obvious obsessive behavioral issues, this could be because your dog is inbred.

What Are The Risks Of Dog Inbreeding?

There are a few risks when it comes to deliberate inbreeding, especially if you don’t know what you’re doing.

Because puppies may not be completely healthy, they could require more nutrients for the moment during pregnancy. This increased demand will take a toll on the mum.

There is also the risk of a complex birth especially if the puppies have physical deformities.

Line-breeding carries the risk of physical deformities. Because the gene pool is too narrow, it may mean that the pup doesn’t grow correctly, causing lifelong issues when they’re born.

Inbred puppies are known to grow up with behavioral issues. These can be anything from OCD to anxiety and destructive behavior.

Narrowing the gene pool can be deliberate if you’re trying to achieve a specific trait in a breed.

However, narrowing the gene pool too much can mean that the breed continues to have health issues, that need to be bred back out again.

This is the case with pugs and their nasal structure. There are now campaigns to elongate their noses again due to this.

Inbred puppies are known to be more prone to illnesses and disease, just because their immune systems aren’t developed enough.

This is because the immunity they have gained from their parents won’t be broad enough to cover all angles as the parents will also be immune to the same things, creating a lack of diversity.

Inbred dogs, especially if they’re line bred, are known to have issues with fertility. This is a sure sign that line-breeding shouldn’t happen and is sometimes a more physical way of stopping it.

Can You Have A Brother and Sister From The Same Litter As Pets?

Sibling rivalry is a thing, even in dogs. It’s best not to choose two puppies from the same litter if you can help it.

Littermate syndrome is the name for the way that some puppies can behave if they are made to live full time with members of the same litter.

Because they’ve spent their whole lives together, you could find that they actually don’t get along as adults. They will constantly compete against each other for affection and food.

This can cause aggression, food stealing, and general anxiety in both dogs. Because they rile each other up, they will most likely be difficult to train too.

Although it’s difficult to choose just one puppy from a litter when you go to visit them, it’s better from a welfare perspective for both dogs if you only take a single one home with you.

If you absolutely have to take two puppies, a girl and a boy together will probably work better than two boys or two girls. This will decrease the rivalry factor slightly.

However, this can present other problems if you don’t get the dogs neutered at the earliest possible opportunity.

Can Brother And Sister Dogs From Different Litters Have Puppies?

Yes, they can. Siblings from different litters may commonly live together in a breeding home environment. In this situation, it often occurs that brother and sister dogs from the same litter will mate.

Although they can identify a familial bond because of their upbringing, they don’t attach the same social stigma to this as humans do.

If you have a male and a female dog from different litters living in the same environment, it is their instinct to try to reproduce and if that means with each other, then so be it.

Because the two dogs also didn’t grow up in the same litter, their bond as brother and sister won’t be as strong. This means they are more likely to see each other as a mating prospects.

Unless it’s controlled inbreeding to achieve a specific purpose, it’s recommended that you avoid breeding a brother and sister. This applies even if they’re from different litters.

Is It Legal To Sell Inbred Puppies?

Yes, you can sell inbred puppies. However, the price you’ll get may vary depending on which family member the dog is bred with to get the puppies and if there are any health issues involved.

It is completely legal to sell inbred puppies. Just a single breeding pair from the same family normally doesn’t cause too many health issues.

However, it’s important to avoid line-breeding (inbreeding over several generations) as this will cause birth defects which will prevent selling.

Some inbred puppies are in demand as professional show dogs. If both parents display the perfect traits required to win best in the show, it’s likely that the puppies will have those traits too.

This means that they could be sold off at a higher price than other dogs.

Should I Tell The New Owners If The Puppies Are Inbred?

If you have inbred your puppies accidentally and are aware of some health issues present in one of the parents, you may struggle to sell the puppies.

Even if they look healthy, telling the new owners may put them off.

But, even if the puppies are healthy, it’s your responsibility to declare the parentage to the new owners.

If it’s just accidental breeding through a single generation, then the owners may not have a problem. You can reassure them that most puppies in this situation are still healthy.

However, selling inbred puppies may mean that you might have to accept a lower price.

People may not be as willing to pay higher prices due to the chance of health issues later on.

You will definitely struggle to sell them and shouldn’t attempt to unless you have no option.

Can a Mother And Son Dogs Have Puppies?

In the same way as sibling dogs can have puppies, mother and son may also have puppies. However, it’s definitely not recommended.

Because mother and son will have largely the same genetics – as half of the son’s is passed from the mother initially – this leaves the puppies exposed to a poorer DNA structure.

If the DNA isn’t strong and unique, the puppy may take on too much of a specific trait. This may make it less adaptable to different situations.

For example, if the mother has the genetic trait of a particularly thin coat, the son may get this trait from her.

Then their puppies, if they were to mate, may have a coat that’s excessively thin and they may be unable to adapt to the cold climate.

Incestuous breeding like this could also make hereditary conditions more pronounced. If the mother has had cancer or heart disease, this defect or illness may be passed down to her son.

The son then has a 50% chance of inheriting those defects from the mother – if the father is fit and healthy.

However, if the son and mother mate, their puppies would have those genes passed along from both parents. Meaning they are much more likely to have these defects later in life.

Can Sibling Dogs Have Different DNA?

Typically, the DNA of each puppy is 50% from the mother and 50% from the father. Although this may vary very slightly if a male or female dog has particularly dominant genes.

However, there are occasions when a female may be mated by two different males – specifically if the breeding is accidental.

This means that 50% of the puppies are likely to have different DNA from the other 50%. While they maintain their mother’s genes, they will get different genes depending on which father they had.

It is possible for a female to get pregnant twice simultaneously.

Although puppies will have the same DNA as their siblings if they have the same parents, the dominant genes for each individual trait are likely to show through.

This means they may look more like their mother than their father, depending on which genes are the most dominant.