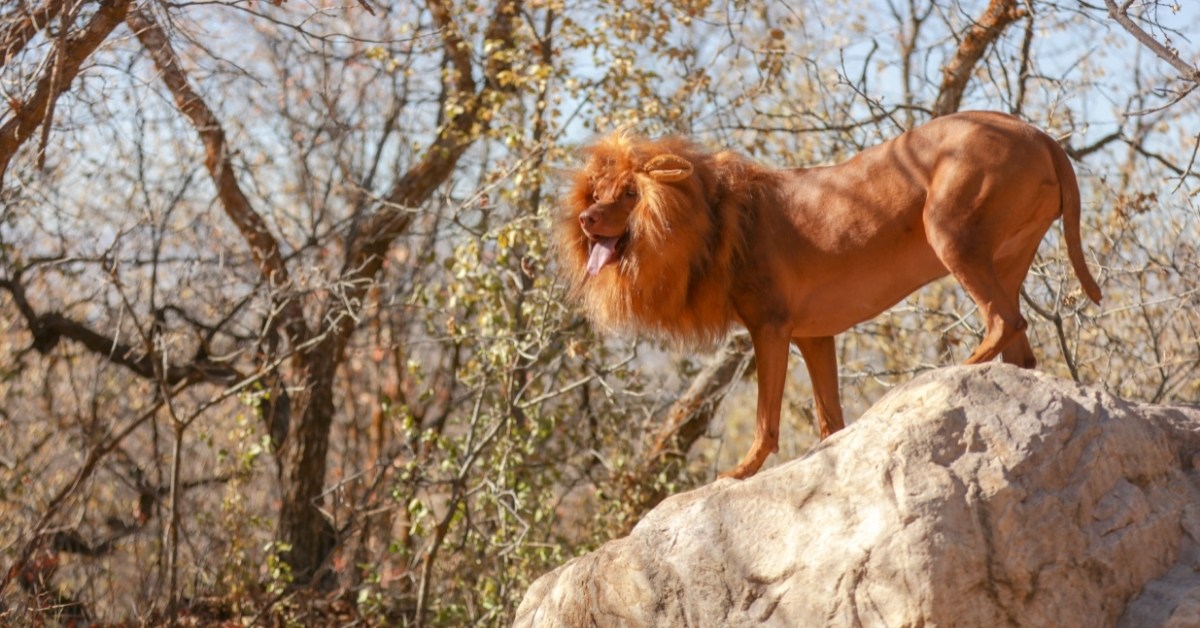 When you think of a lion you think of the ultimate predator. However, sometimes a lion can meet its match when it comes to a fight with an animal a bit closer to home.

There are some dogs that are incredibly strong and intelligent enough to fight and even kill a lion. Let’s take a look at them.

It is crucial to be aware that lions do hunt in prides and whilst the dogs listed below would certainly put up a fight if faced with a group of lions, it’s unlikely that they would be able to defeat all of them.

A combination of a wolf and dog as suggested by their name, they have incredibly sharp, powerful teeth. As they are part wolves, they are naturally aggressive animals.

When you combine their aggressive nature with amazing intelligence, it’s an animal that can handle its own in a fight for sure.

Whilst it is true that all dogs do possess some wolf in their ancestry, a dog can only be classed as a true wolf-dog if they have a pureblood lineage with an actual wolf within the previous five generations.

These dogs can grow anywhere up to 33 inches and can reach a maximum weight of 120 pounds. They are very impressive to look at but are quite intimidating.

Because this breed has feral wolf genetics, it doesn’t make for an ideal house pet. This breed, whilst can be made domestic still possess a violent, aggressive nature and a high prey drive.

Wolves hunt and prey on animals in the wild and due to this, the wolfdog is certainly a dog that has a chance of killing a lion.

This dog has incredible agility and strength, something that a pet owner should consider when trying to obtain one as a domesticated pet.

Found in South Africa, the Boerboel dogs are excellent at guarding farms against predators such as boar.

Whilst this dog has immense physical strength, they are extremely affectionate towards their owners. This type of dog is part of the mastiff lineage and has incredible agility for a mastiff.

These dogs can weigh up to a whopping 200 pounds in weight. As for height, you can expect to see a large male peaking at 28 inches.

They are banned in some countries such as Denmark due to their aggressive nature and are not recommended for a family home.

These dogs were essential to defending the home in earlier times. They have no problem hunting hyenas, baboons, and other large cats.

This breed is a highly effective guard dog due to its amazing guarding nature. Due to its unmatched physical strength and intelligence, it has the chance of beating a lion in a fight.

Quite a popular dog in today’s society and is commonly called the ‘Rottie’. Rottweilers are used for rescue missions and are also used by local authorities as guard dogs.

They are a very loyal breed and excellent at guarding you and your family.

The original purpose of this breed was to instruct cattle to the market and also pull carts to the butcher’s premises.

They were the first breed of dog to serve in the military and also the local police force.

Nowadays, they are highly responsible family guardians and it is important to be aware that these dogs require an experienced trainer.

They are incredibly fierce and can become aggressive when not handled correctly.

If you have a Rottweiler as a guard dog, you will notice they are excellent alarm systems and will warn you of strangers straight away.

A large male Rottweiler can grow up to 27 inches tall and you can expect them to weigh a maximum of 130 pounds.

The Rottweiler breed is very intelligent and is eager to please when performing tasks. It is able to endure highly physical work and is fearless when it comes to a fight with another animal.

A combination of this raw strength and intelligence would allow the Rottweiler to give a lion a run for its money.

Used commonly in Italy for their guarding qualities and now best known for their appearance as ‘Fang’ in the Harry Potter series, the Neopolitan Mastiff is a very large powerful breed.

Due to their loose skin, at first glance, they appear quite unfriendly. However, they are extremely loyal and will do anything to please their owner.

If you look into the history of this breed, it was common for the Romans to use this dog to fight lions and humans in battle.

This may have been for war purposes or protecting people’s belongings.

A large male mastiff can weigh a massive 150 pounds and can grow to be 30 inches tall.

When their territory is challenged they can become very defensive and show aggression to their attackers.

Due to their physical strength and size, they may be able to put up a good fight against a lion.

The Fila Brasiliero originates from Brasil and is used for hunting purposes. These dogs have immense guarding skills due to their lineage.

When slavery was big in Brasil, these dogs would guard them and therefore they need to be constantly worked.

A large male dog will grow up to a maximum of 30 inches and can weigh anything up to 190 pounds. This dog possesses immense physical strength and tracking abilities.

This dog breed is banned in many countries due to its aggressiveness and is definitely, without an experienced trainer, never recommended for a family home.

Due to their hunting background, they are incredibly intelligent.

Because of its sheer power and aggressive nature, this dog may be able to stand toe to toe with a lion and possibly win through determination.

Used due to their incredible tracking abilities, the Bloodhound has no problem tracking people or wild animals.

Used commonly in law enforcement due to their skills, they can easily track down suspected criminals when on the loose.

They can track scents from impressive distances, even if it is not a fresh scent.

In terms of size, a male dog can grow up to 27 inches and weigh up to 160 pounds. Whilst not normally aggressive, when put under pressure and backed into a corner they can be incredibly defensive.

Due to their brilliant sense of smell and even temper, they might be able to fight a lion, should the situation arise.

Another incredibly, physically strong breed. The Dogo Argentino originates from Argentina where it hunts boars and puma.

They are immensely brave dogs and will protect you as the owner from harm wherever they can.

The Dogo Argentino is also known as the Argentinian Mastiff or Argentine Dogo.

Physically athletic, and exceptionally loyal. They have the ability to dip into two different personalities, the aggressive, powerful hunter and the loyal companion.

This breed is phenomenally prey-driven and strong-willed.

It does not trust strangers and requires a firm but fair owner to correctly train this breed of dog.

The male can grow anything up to 27 inches tall and can weigh up to 100 pounds. This breed needs to constantly be working as it quickly becomes bored.

This dog is used by military workers due to its amazing endurance levels. This dog can easily take down large animals due to its size and physical strength.

The Rhodesian Ridgeback originates from Europe and South Africa. This dog is incredibly muscular and has the ability to run at extremely high speed.

They can maintain speeds of up to 30 mph.

Because of this high-level agility and strength, it is considered to be one of the best hunting dog breeds.

A male can grow up to 27 inches and weigh anything up to 85 pounds.

When it comes to intelligence, this breed is incredibly smart and can hunt prey without much trouble.

They also possess amazing tracking skills to make sure they reach their target. Due to their speed and physical strength, they are a worthy opponent for mountain lions.

The Tibetan Mastiff is a nocturnal, large dog. They have very long fur and are active during the night because of their guarding abilities.

They are incredibly loyal to their owners but do have an aggressive side when provoked.

Their purpose is to guard livestock and guard the owner’s premises. They can grow up to 26 inches tall and weigh up to 150 pounds in weight.

To look at they can be quite intimidating despite their fluffy appearance.

They are quick at reacting to danger and incredibly stubborn so you can expect them to not back down. They require a very strong owner to train them correctly as they do not take well to being dominated.

Once trained they are very faithful and possess the physical strength and determination to take down a lion.

Originally from Turkey, the Kangal is known as the ‘Anatolian Lion’. It easily possesses the strongest jaws and bite among any dog, the strongest being recorded at 734 psi.

The Kangal is a large guard dog originally from Sivas in the center of Turkey.

This breed does not herd the livestock but defends them from predators such as wolves, bears, and jackals.

The Kangal is a true protector and is extremely loyal once trained by the right owner.

It is currently forbidden to have this breed exported outside of Turkey due to the value they bring. This may be considered, if for livestock defending purposes.

This dog breed is fearless and will show determination in any circumstances. With this being said, it may be able to defend itself from a lion and put up a challenge.